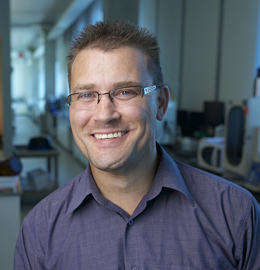 I conducted my postdoctoral work in the laboratories of Drs. Bart Hazes and Laura Frost, both at the University of Alberta. My research focused on two systems, both of which I am still very much interested in. The first system under investigation was aimed at correlating protein structure and biological activity of type IV pilins, in particular those from Pseudomonas aeruginosa. The goal of my PDF research was to develop an anti-pilin therapeutic, but in the course of these studies I discovered their oligomerization into protein nanotubes, a project we explore in my lab at York Univeristy. I have also expanded these studies to pilins from other bacterial systems.  The second project focused on the F-plasmid, which focuses on coupling a detailed structural understanding of the proteins involved in F-plasmid conjugation with detailed biochemical data to provide a clearer understanding of the conjugative process. I continue to focus on structural investigations of the F-plasmid system, and more detail can be found on the lab’s research page.

My doctoral research was carried out in the laboratory of Drs. Louis Delbaere & J. Wilson Quail in the Department of Biochemistry at the University of Saskatchewan. My doctoral research had a dual focus, though both projects were examined using X-ray diffraction methods. The first research focus was the investigation of a lectin-carbohydrate complex. The lectins are a class of proteins which exhibit a high binding specificity towards carbohydrates, yet are non-immunogenic and non-enzymatic. The lectin being studied in this project was the first lectin from Ulex europaeus (UE-I), which exhibits specificity for the O(H) human blood group determinant (α-L-Fuc-(α-1-2)-β-D-Gal-(β-1,4)-β-D-GlcNAc). The structure of the native (uncomplexed) UE-I has been published in J. Mol. Biol., and the paper describing the UE-I:carbohdyrate complexes has can be found in a special issue of Can. J. Chem. dedicated to the late Prof. Raymond Lemieux. The second research focus was the investigation of the regulatory form of the protein HPr from the Gram-positive bacterium Enterococcus faecalis. In Gram-positive bacteria, HPr is phosphorylated at the conserved Ser46 in a regulatory fashion to allow for growth on preferred carbohydrates (such as glucose) in the presence of other non-preferred sugars; this research can be found in J. Mol. Biol. I still have an interest in protein-carbohydrate interactions, and the lectins in particular…I just need some time to get back to it.

I have for many years practiced Kendo, the Japanese way of the sword. I currently hold the rank of yondan (4th degree black belt). I practice with the Mississauga Kendo Club, where I am an instructor and club president. I also enjoy soccer, and have coached my son’s soccer team for the past several seasons, spending time camping and enjoying the outdoors.